My iPod Touch just went missing for about two hours. I usually know where it is at all times because a) I'm an addict and b) I have a two year old. If I don't know where something is there is a high likelihood it is in a toilet or garbage can.

I knew I had used it this morning
I knew where I was sitting.
I knew it wasn't there anymore.

I looked at what was in the general area of its last known whereabouts. A Viewmaster. Some stuffed animals. Clark's digital camera. (And a bell and a book and a candle and a monocle, if this were an actual mystery.) Hmm.

Maybe Clark took my iPod into his room and got out his camera instead?

I went in his room and looked on his toyshelf. The basket that usually contains his camera was empty. I looked directly underneath the toyshelf in the same area as the basket. There were cobwebs. And... way way in the back corner something silver.

I have no clue how long it would have taken me to look there if the thought hadn't struck me. 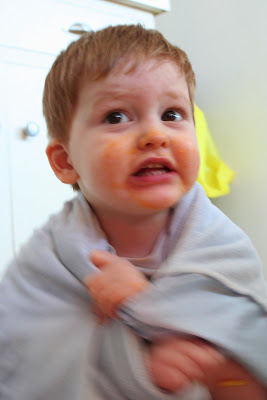 He looks rather suspicious, don't you think?
Posted by swonderful at 12:30:00 PM