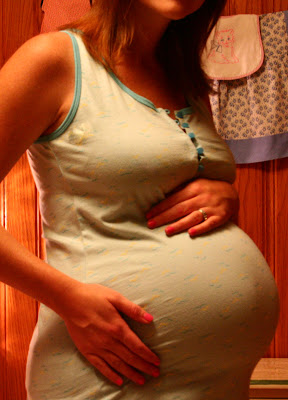 Six months ago right now I was watching the Olympics. Or maybe I had just turned them off. It was the very last event in Women's gymnastics and I had stayed up to watch through the medal ceremony. I was so tired and so uncomfortable. I had had several weeks of stop and start prodromal labor contractions that felt ohsoreal and ohsouncomfortable and then went ohNOwhere. I sort of told people about it, but what's the point? It's hard to explain that it really feels like you're in labor and then it really goes away every single night. "Oh, Braxton Hicks" they inevitably say. No, not Braxton Hicks. Something like that but these are intense. And feel like labor. And are impossible to sleep through.

I had imaginary conversations with Alice in my head a lot. I tried to mentally coax her to find a way out or at least send me some kind of signal when things were really happening. My first pregnancy ended in induction. This going-into-labor magical froufrou stuff I had heard about was all brand new to me. Part of me very sadly believed my body was broken and would never figure things out.

At 6am on August 20th, I woke up. I kind of maybe thought I was kind of maybe in labor.
At 7am things were getting intense.
At 8:30am we drove to the hospital. I walked to the car barefoot and moaning like a crazy lady. I went through transition in the car. I don't recommend this.
At 9am I was trying to get the baby out. (This part required every drop of energy I could muster. She was persistent posterior and asynclitic aka facingupandsideways)
By 10:30am, my little daughter was staring at me and I knew she was beautiful and I knew she was worth it and I would have done it all over again right on the spot if I had to.

Alice Vivian - on her birthday. 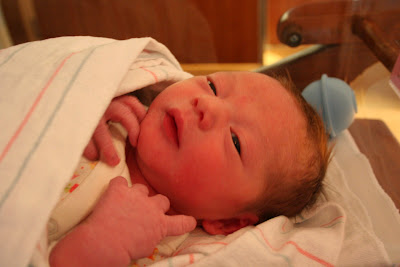 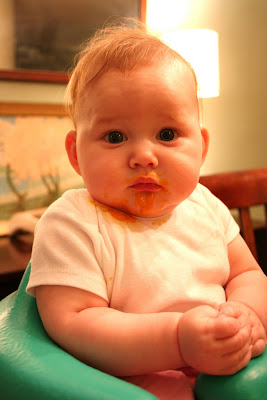 (This was her first taste of "food" and she made it very clear she prefers milk. Oh, and she has very obviously gained nearly 12 pounds since she was born. Most of it in the cheeks. )
Posted by swonderful at 12:55:00 AM

Email ThisBlogThis!Share to TwitterShare to FacebookShare to Pinterest
Labels: alice, having babies