I almost told the short version of this story, but I couldn't do it like that. I just couldn't.

My parents divorced when I was teeny. My dad moved back to his home in NYC, and my mom and I moved in with my grandparents. We lived with them until I was eight.

The six years I lived in their house were happy and dreamy and full of love. That might sound cheesy and cliche, but what other words am I left with to describe my home there, with them? Here. I'll show you. 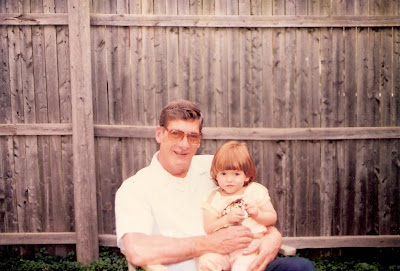 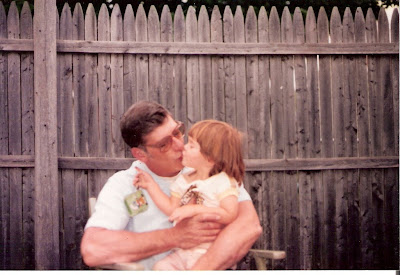 Me and Papa. Like my haircut?
As the only child in a family that included my 20-something mommy, Papa, Grandma, and my two Uncles, I was pretty much the center of attention, um, all the time. But it didn't spoil me. Really. It was formative. It was healthy. It was exactly what I needed. It was God's plan for me. It was such a gift.

I could probably write a book about growing up in that house, but I'll get to the point.

Every single day, I spent time dancing and singing while Papa played the piano or the organ.
He was AMAZING. Truly amazing. He taught me every old classic standard there is, and he played them all by ear. It was both a job and a hobby for him. It's what he did to relax. It was as much a part of his day as eating or breathing. It was just his thing. 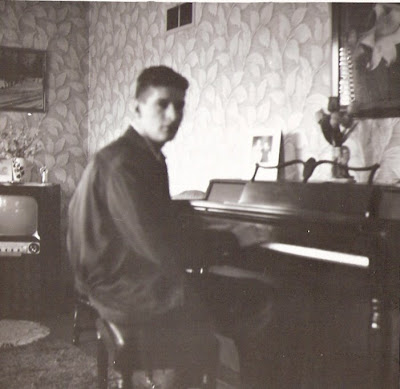 Papa playing piano as a teenager.

This is not the story I want to be telling you, but Papa is sick. Really really sick. He can't play the piano anymore. He can't walk. He can't even feed himself. He's only 73. When I think about him, my heart breaks. I don't want it to be true. It's hard to even type these words.

At our Easter brunch a man was playing the piano to entertain the crowd. All old classic standards. All by ear. At first I wanted to sing along. Then I was mildly annoyed by a sick feeling in my stomach. Then I started sobbing, right there in the Riviera Club and couldn't stop. We went home.

I took the kids up to visit Grandma and Papa last week. They still live in the same house.
Every time I leave, I wish I could take it with me.

When I was 11, we moved to Indianapolis. We would visit on weekends, and when it was time to drive the 2.5 hours back to our new house, I would always steal something from my grandparents on my way out. It makes me laugh a little now to imagine my grandma looking everywhere for a coaster or a trinket, wondering where it possibly could have gone. I would take these stolen items out later, in secret, and feel for just a tiny fleeting second like I was back there in that safe and happy house, and not in a new school in a new town with a bunch of people I didn't know.

I don't have to steal stuff anymore. Now my grandma just gives it to me.

I told Luke all about this little table, all dreamy and sentimental like. Then I asked him to go get it out of the car. When he came back in he yelled in an urgent voice, "ERIN you are going to be FURIOUS! Someone stole your grandma's table out of the back of the car... and replaced it with (pointing) this piece of crap!" My heart sank for a moment before I looked over and realized he was just joking and was actually pointing at my grandma's table.

(Okay, so it's a little rickety and needs to be repainted. Did I mention it is old, old, old? IT IS NOT JUNK and guess what Luke? We are going to have it FOREVER, so I guess the joke is on you.)

I am secretly so glad I have Luke's mean jokes to cheer me up and keep me from falling into a cheese-fest sentimental coma.
Posted by swonderful at 9:44:00 PM

Email ThisBlogThis!Share to TwitterShare to FacebookShare to Pinterest
Labels: ALS, LaPorte, thank you