off to fetch my umbrella

At about nine o' clock I was settling in and preparing myself to watch "The Dark Knight" on our new television* drinking a very large caffeinated beverage to stay awake and praying my kids didn't wake up.

Suddenly I wished the caffeine had been wine and that I was in any way sleepy whatsoever because there was nothing to do but go to sleep in our powerless house.

Instead of going to sleep, we sat in the dark living room (I recently threw away our candles because I was doing one of those crazy-lady stuff-purging sessions) and I sang songs to keep Clark from freaking out. I sang "This is the day that the Lord has made" and "One Last Kiss" from Bye Bye Birdie and "Think Happy Thoughts" from Yo Gabba Gabba. He decided he wanted to go to sleep. Praise God. I would like to think he wanted to go to sleep because my singing was soothing rather than bothersome thankyouverymuch.

We also listened to Alice say "uh-oh" over and over as she crawled and bumped around in the dark. Hearing her voice excites me for the future. She is a real girl, MY girl, I can just imagine her talking and whining and singing and being my little comrade. I can't wait to make dinner with her and buy her a prom dress and watch her star as Kim MaCafee in her high school's production of Bye Bye Birdie. (I mean probably. Not that I think like this or would expect this or anything. But I do have tap shoes she can use.)

At one point Clark pointed outside and said "Look mom a puppy dog!" and my heart lept and I was compelled to rescue the cute little puppy making its way across our front sidewalk. Then I felt like Brenda in "Adventures In Babysitting" when I realized it was a rodent, scampering away (from where??) to escape the storm. Also, I think our patio umbrella is now in a neighbors yard. And our neighbors are kind of far away.


*We are officially people with a big flat screen television in our living room. My hubby was able to purchase one almost entirely (we payed a very VERY small amount-- one Target trip of money-- out of pocket) with Best Buy Reward Zone coupons and credit card rewards. As much as I wanted a new fridge instead (ours is awful and the door doesn't close all the way and it leaks water all over) it is Father's Day weekend not Mother's Day weekend. I resisted a large TV for a long time both because we are dirt poor and also because I wanted to preserve the aesthetics of our tiny living room. But I really like seeing Luke excited about stuff. 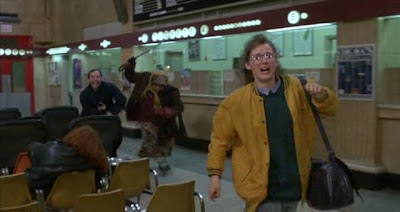