I was really sick all weekend, and have spent the last few days trying to get rid of the Easter grass and total chaos that accumulated while I sat on the couch blowing my nose.

Also? I've gotten really introverted lately.  This is what pregnancy does to me. Is introverted even the right word?  I get all reflective and start over-thinking everything and talking to myself during the day like some kind of crazy lady.  I was in nesting mode for the entire second half of my pregnancy with Alice and I seem to be repeating that.  I get obsessive about silly stuff and important stuff.  I think and chatter to myself about how I want to soak up time with the two kids before I have three and how I want to prepare this house for the (over) load of five (!!!) residents rather than four.  When I'm not thinking about these things, I am doing them, and sometimes I am maniacally thinking about them WHILE I'm doing them.

It isn't that our house is tiny, exactly, it just isn't very big.  It's a 1954 ranch with three bedrooms and one and a half bathrooms.  There are so many things I love about it.  Really.  I have made lists in my head!  I've sighed, recounting them to myself while lovingly cleaning floors and organizing the pantry and purging all kinds of crap from the closets.  No matter how many cozy feelings I have about this little house, to fit another human in it we have to get rid of a bunch of blankets and movies and papers and stuff.  That's just a fact.

(Is it normal to have four people in a three bedroom house?  Do you all have sprawling homesteads or am I in good company?)

It also occurred to me recently (now that I am 21 weeks pregnant) that I am going to be GIVING BIRTH again.

And something to obsess over while I sweep and sweep.  And sweep. 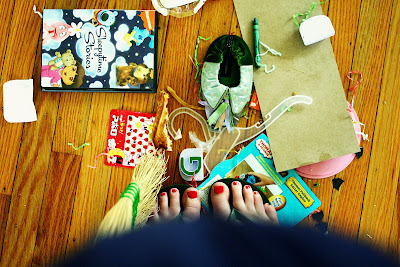 (Please squint as you glance at my weird toes and pretend you don't notice them.  Feel free to take notice of  the blue half-moon shaped protruding baby boy stomach without any kind of visual handicap.)

This is what was going on on the other (already swept) side of the living room while I took the photo of the junk on the floor.

My kids were playing "The Princess and the King".  I just had to show you what a fantastic dainty girly princess Alice makes, and what a hilarious, pimp-like King 'costume' Clark has on.  He is wearing a vintage White Stag Teddy Bear Coat.  He calls it his King robe.  Like most of the weird stuff I own, it was 75 cents at the Salvation Army. 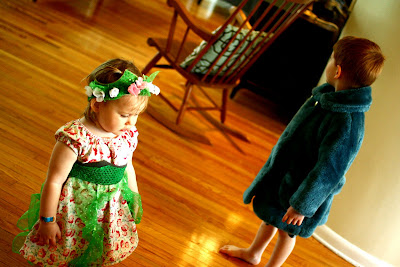 Email ThisBlogThis!Share to TwitterShare to FacebookShare to Pinterest
Labels: alice, clark, i think i have add, new baby, our house