baby in the corner

Gosh are you guys wonderful or what?

I put off talking about our plans for a homebirth for 35 weeks to avoid negativity, and look what I could have been soaking up!  Thank you all very very very much.  Very much much much.

And your name suggestions were spot-on.  In fact I think someone suggested the name we are probably going to use, and you also suggested most of the other names on our list.   I feel loved and known.  Isn't that a good feeling?


It's kind of funny, preparing for the third baby.  The third baby in three and a half years.  Funny and crazy.  It is flying by.
Physically, I feel full-term 40 weeks pregnant right now.
Mentally?  I am stuck somewhere around 28 weeks.
In reality?  I am 36 weeks.

I usually put a lot of energy into making the nursery, and it mentally prepares me for the inevitability that another person will be living in our house.  I am not saying that the nursery is as important as the Pottern Barn Kids catalog makes it look.  It really really is not important and is totally just a psychological thing.  Both of our kids have ended up sleeping in our bed for a long time and their rooms just got dusty for awhile and I could have worked on them later, but I preferred to get all insane and bossy and fixated because it just plain felt good.  MAKING the room is therapeutic for a pregnant woman, you know?  It is therapeutic for this pregnant woman.

This was Clark's nursery: 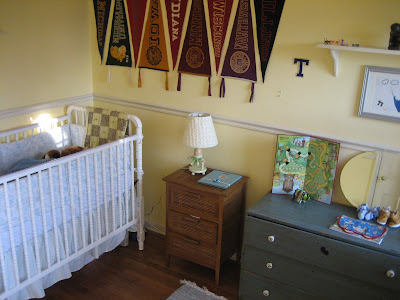 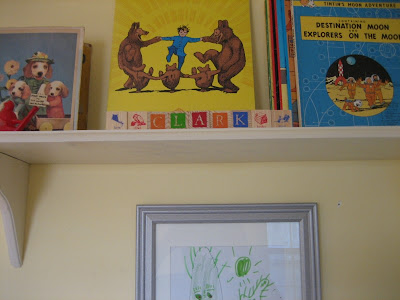 We moved out of that house when Clark was six months old and he never ever used the room.

This was Alice's nursery: This is still Alice's room, though it has evolved as she has gotten older: Older brother and straw hat included.
We have a three bedroom house.
This crib is in the corner of our bedroom. As certain as I am that he will never ever know or care that he did not have a nursery (100% certain) it is messing with my head that I can't pour my energy into making a room for him.

I want to destroy and create something.  I want to decorate.  I want to collect more weird kid stuff from the thrift store and project a personality onto the tiny human I am growing and do not yet know.

At some point this baby will move in with Clark and I can go wild rearranging and painting and decorating and all of that stuff I cannot do right now.  I am tucking that future experience into my back pocket and pretending that Clark does not have extremely strong opinions about everything and will want to be at the very least involved in the project, if not spearheading it.

(Sidenote:  That mobile was mine when I was a baby.  My mom just happened to find the pieces when I was over there hanging out one day.  It made us both really excited and happy that this little boy gets something special that has not had its specialness all used up on the other kids.  This one is just for me and you New Little Baby Boy.)
Posted by swonderful at 12:33:00 AM