some things about november

There is this chalkboard in my kitchen and for the longest time I would use it to hype my family up about the things ahead.  I would write the name of the month and then write all of the fun things we were going to do. But then, exactly a year ago this past weekend, I wrote some things about November.  I wrote about Luke turning 30 (which was already over but a major event worth writing on there and crossing off, just because) and Thanksgiving and I remember writing the word "thankful" and cringing inside because I didn't feel it. Our kitchen drain was clogged and our dishwasher was broken and hours of frustration and telephone calls and desperation were going on, all around me, as I found a piece of chalk and threw those words up there. But we were just a few days off of Thanksgiving and I really wanted to be cheerful. So I wrote fakey cheerful stuff.  NOVEMBER!  THANKSGIVING!  THANKFUL! TURKEY TASTES GOOD!   I wrote it and looked at it and forced a smile at it.  It was my little bit of, okay, this week will be saved.  I can make this stuff come true. The plumber will come and my kitchen will not smell like this anymore and this fiasco will be a funny memory and nice-feeling things will happen.

But I didn't make it come true.
The drain was fixed and the dishwasher replaced and then -- my grandma died.
Unexpectedly.  Out of nowhere.
A year ago tomorrow, but it really feels like today because it was Monday.

So the turkey went into the deep freezer and all the other Thanksgiving stuff was pushed aside and away as we frantically packed suitcases with black clothes and sippy cups.  The framed photos of her as a little girl were grabbed off of the walls to display at the visitation.  It felt insane and hazy.

My grandma wasn't just a lady.  She was MY GRANDMA.  A beautiful wonderful lady who rocked me to sleep and sang to me and taught me things and made me breakfast (peanut butter toast cut into four pieces and a bowl of cereal and chocolate milk) and took me to school every single day of elementary school.  My mom and I lived with her until I was eight and after we moved out she would answer the phone in this particular cheerful voice asking, "How's our sweet girl?" every time I called.  She was the best.  She still is.  We just don't get to look at her and tell her so now.

Erasing that fakey cheerful stuff from the chalkboard last November was hard.  It's funny how your brain latches on to things and puts your sadness there. With each new month I would intend to write fun things but instead stand with the chalk in hesitation, mostly choosing generic words or drawings instead. A cat drawing stayed for many months, until yesterday when Alice brought it up.  "Why is that cat on there all the time?  It should be a turkey.  My school turkey needs a mommy and daddy."

Her school turkey was made out of her hand print, so at her insistence, we made a family out of handprints. 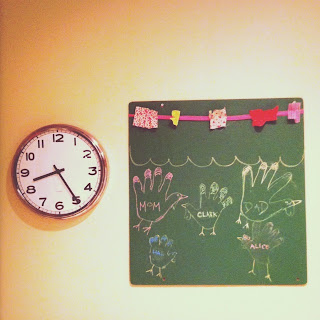 And then I went out to the garage and got last year's uneaten turkey out of the deep freeze and threw it in the garbage.

I am going to use my grandma's potato masher that now belongs to me and we are going to do this.  We will eat turkey and potatoes and dressing and I will hug my mom and kids and brothers and husband and be thankful, for real.